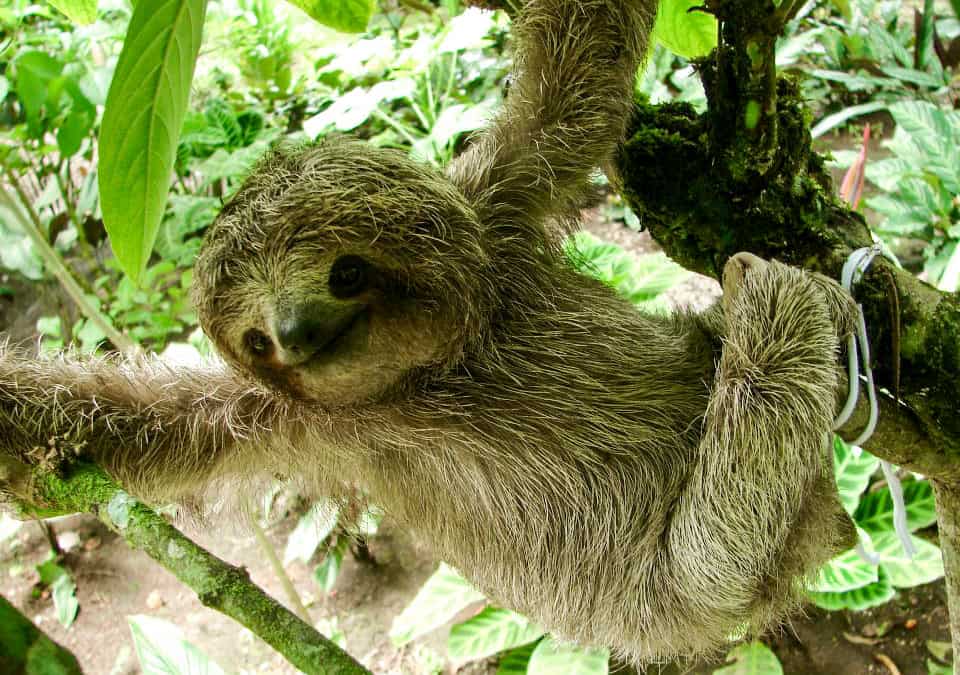 When thinking about Costa Rica two main animals will come to mind often: sloths and the red-eyed frog.  Today we will be talking about the cutest of the two: the sloth. Stay with us and learn more about this smiley friend and where to find Sloths in Costa Rica.

The sloths have inhabited our planet Earth for over 60 million years.  Even though they look like monkeys or bears, the sloths belong to the superorder Xenarthra, which also includes anteaters and armadillos. At the same time, the order of Pilosa ties up the sloths and anteaters due to their “hairy” look. And finally, the suborder Folivora groups the different species of sloths into two remaining families:

1.The three-toed sloth with four species of which the brown-throated sloth inhabits Costa Rica.

2.The Megalonychidae, which contains the two-toed sloth genus, that at the same time includes the Hoffmann’s two-toed sloth that can be found in our country.

So regularly, you will hear about two- or three-toed sloths, however that would be the name of the family not actually the name of the species. And, even though the two families belong to the Folivora group, there is no evidence of a last shared common ancestor.

The arboreal mammals can only be found in Central and South America.

The two families of sloths share their taste for eating tree leaves, however each one has a specific diet. While the two-toed sloth also includes insects, fruits and small lizards and moves in large areas of the forest; the three-toed sloth only likes the leaves of a limited number of trees, and it is normal for its activity to be limited to small areas.

A sloth can get to measure up to 2.5 feet, and weight up to 17 lb, being the two-toed larger than the three-toed. Sloths live most of their time up in the tree canopy. Three-toed sloths descend just once a week to excrete.

Sloths move so slow due to their extremely low metabolism, lasting up to a week to digest.  It also is an evolutionary adaptation, so they could be less noticeable to potential predators.

The sloths are an ecosystem of its own, hosting colonies of algae, fungi, moths, mites, and other arthropods. The algae give a greenish color to its fur, allowing them to camouflage.

Where to find sloths in Costa Rica?

You will find a slot wherever there is a rainforest. However, no matter where you go, an untrained eye will find impossible to spot a sloth within the branches and leaves of the lush forest.  We recommend you to always travel with a certifies guide to enhance your experience and have more probabilities of watching a slot in the wild.

Some areas you can visit for sloth watching in the wild include:

If you prefer a more controlled environment you can visit the following associations dedicated to protecting our “Pura Vida” fellow:

Costa Rica is home to 500,000 species, among all of them it is impossible to deny that Sloths have a special place.  Sloths are not only cute but also represent the mystery of evolution and the beauty of mother earth.

On your next visit to Costa Rica be sure not to miss the experience of being close to one of these amazing animals.  Contact us and we will be sure to help you achieve it!